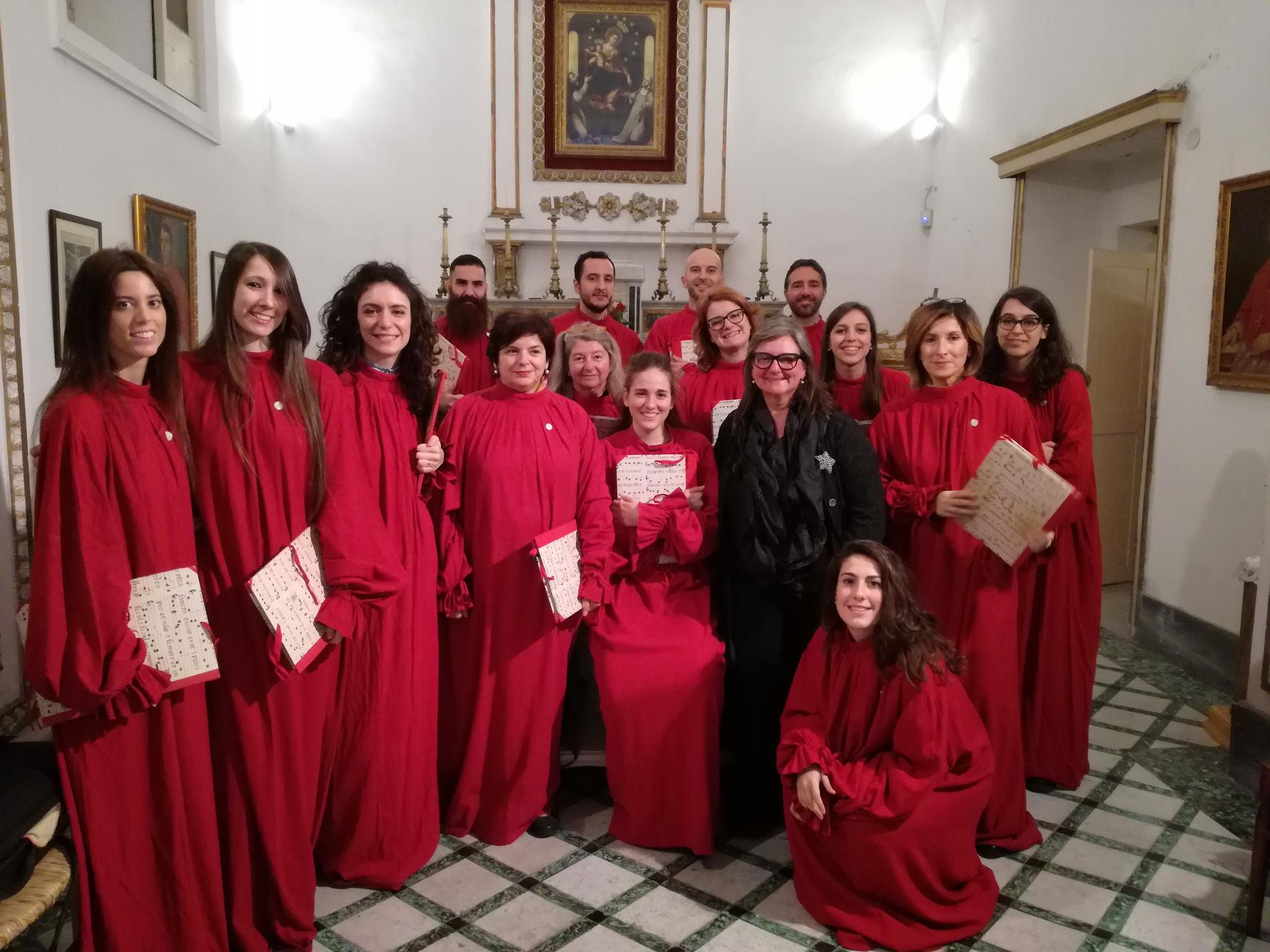 The University of Parma Choir came into being in 1968 upon the request of both teachers and students, who named it after the Parmesan composer Ildebrando Pizzetti (1880-1968). Over the years, the choir has collaborated with noteworthy institutions such as the “Teatro La Fenice” in Venice, the “Teatro Regio” in Parma, the “Arturo Toscanini” Symphonic Orchestra, the Chamber Orchestra of Mantua and the “Arrigo Boito” Conservatoire in Parma. It has also often participated in international festivals in prestigious settings in Italy, Scotland, Catalonia and Greece, such as the “Abbey of Chiaravalle della Colomba” in Piacenza, “Hutchensons’ Hall” in Glasgow, the “Sagrada Famiglia” in Barcelona, among many others. The choir also performs medieval music, a practice which has been established through the choir’s participation in the “Festival Oltrepo medievale” (Oltrepo Medieval Festival) and in the “Festival dei due mondi” (The Two Worlds Festival) in Spoleto. In recent years, the choir has received a positive response not just from members but also from music-loving citizens, thanks to numerous concerts held in and around Parma. Strong links have been forged with cultural institutions such as the administrative bodies of Parma and Piacenza and Mantua and Brescia, having taken part several times in “La notte dei Musei” (Museum Night) e la “Settimana della Cultura” (Cultural Week). It has a thriving and continuous collaboration with the “Soli Deo Gloria” festival in Reggio Emilia, with the Municipality of Parma and with the “A. Boito” Conservatoire in Parma, associations which strongly root the choir to its birthplace. Additionally, the choir performed on “Telethon”. In 2007, the choir joined a close network of Italian University Choirs, with the aim of increasing musical and cultural exchanges. It has held concerts at numerous universities, such as Ancona, Reggio Emilia, Perugia, Venice, Macerata, Camerino, Pisa, Genoa, Bologna, Florence and Verona. 2008 marked the foundation’s 40thanniversary, for which the choir organised and has since continued to organise the “Gaudeamus in Musica” music festival, which celebrates the world of university music associations. From 2008 onwards is when the choir started touring regularly abroad: Madrid, Istanbul, Munich, with concerts hosted at universities and Italian Cultural Institutes. In 2013 the choir was selected for the “Festival International de Musique Universitaire” in Belfort, France. In 2015 it participated in the first edition of the “UNInCANTO” Festival of University Choirs to mark the occasion of 150 years of “Firenze Capitale”, while in 2018 it was awarded the “Feluca d’Oro” at the Urbino “UNInCANTO” festival. In the same year, it also went on tour to Jerusalem, organised by AERCO, an association for choirs in the Emilia-Romagna region, in collaboration with the “Youth European Orchestra” directed by Paolo Olmi.
The choir has been led by the conductor Ilaria Poldi since 1994.

The Choir Le Allegre Note is the result of a school project born within the 3rd Educational Circle, today named Istituto Comprensivo I.C. 1 of Riccione, which counts among its ranks 115 singers, mostly pupils and former students of the school aged between 7 and 14 years. However, the choir is open to all children that live in Riccione! The choir celebrated its tenth anniversary in 2010, publishing the volume Tutta qui la cantoria… presto! In addition to traditional activities such as musical events, school twinning, solidarity projects, the choir Le Allegre Note has also always addressed to a more demanding area, aiming to offer to the young singers, qualitative and cultural experiences.  Thus, among the dozens of shows and concerts performed to date, the choir has collaborated with symphonic and chamber orchestras and events of particular artistic importance. The choir has participated in dozens of productions such as Carmina Burana, Tosca, Boheme, Carmen, collaborating with prestigious theaters and symphonic and chamber music institutions up to the percussionists of the Accademia di Santa Cecilia in Rome. In 2008 they sang in H. Berlioz’s Te Deum under the direction of Maestro Claudio Abbado, in Bologna with RAI 1 television recording. The choir also sang on RAI 3 for the 2004 Memorial Day, performing the soundtrack of the film La vita è bella. In 2013 the choir gained the First Prize at the 5th International Competition Città di Treviso and First Prize at the 13th Città di Faenza Choral Competition. In May 2014 First Prize at the 14th Città di Faenza Choral Competition Cat. B. In May 2015 First Prize Cat. B and Second Prize Cat. A at the 15th Città di Faenza Choral Competition in addition to the Silver Band Diploma at the 3rd International Competition Queen of Adriatic Sea – Cattolica (RN). In March 2018 the choir won the First Prize at the C.I.M.P. Pesaro International Music Competition in the School Prize category. In May 2019 First Prize at the Choral Competition Giovani Voci per Guido”– Arezzo. Since 2004, the Choir has been included among the associations sponsored by the Municipality of Riccione. In the autumn of the same year the Choir Note in Crescendo (NIC), that brings together the most “elderly” choristers attending the last years of secondary school and the first years of high schools, was born from the choir Le Allegre Note. The two groups do separate activities but, on some occasions, they perform together. To date, Le Allegre Note and the Note in Crescendo have produced over 400 performances. The choir has been directed since its birth by prof. Fabio Pecci.