Inhabited since prehistoric times, as evidenced by the finds discovered in the area dating back to the Neo-Eneolithic and Bronze Ages, it was later inhabited by other settlements until it was conquered by the Romans. The toponym, which appears in medieval documents in the forms Medusiano, Medexana, Medaxano and Medexano, derives from the Latin personal MEDISIUS or MATISIUS, with the addition of the adjectival suffix -anus. Included in the 9th century in the list of lands donated to the monastery of Sant’Alessandro in Parma by Queen Cunegonda, it was the object of bitter disputes between the people of Parma and Piacenza, becoming the scene of battles and suffering inevitable devastation. During the 1100s, Oberto Pallavicino had a fortress built there, which remained in his family until the first half of the 14th century, when it passed to the Da Correggio family, who destroyed it at the beginning of the 15th century to prevent it from falling into the hands of the Visconti family. Sacked by the troops of Charles VIII, who crossed the territory after the battle of Fornovo di Taro at the end of the 15th century, it was subsequently granted to the Cornazzano family, who were succeeded by the Sanvitale family. It became part of the Farnese Duchy, which the Congress of Vienna assigned to Maria Luigia of Austria, and was annexed to the Kingdom of Italy in 1860. The following history, which lacks events of particular importance, does not differ from that of the rest of the province, which was actively involved in the partisan struggle. The historical-architectural heritage includes a number of religious buildings, among which the following stand out: the church of San Pantaleone, built in the first half of the 20th century in neo-Gothic style; the church of San Michele, in Roccalanzona, with valuable 18th-century works; the church of Santa Lucia, in the village of the same name. The Municipal Hall is named after Maestro Romano Gandolfi, who was born in this town. 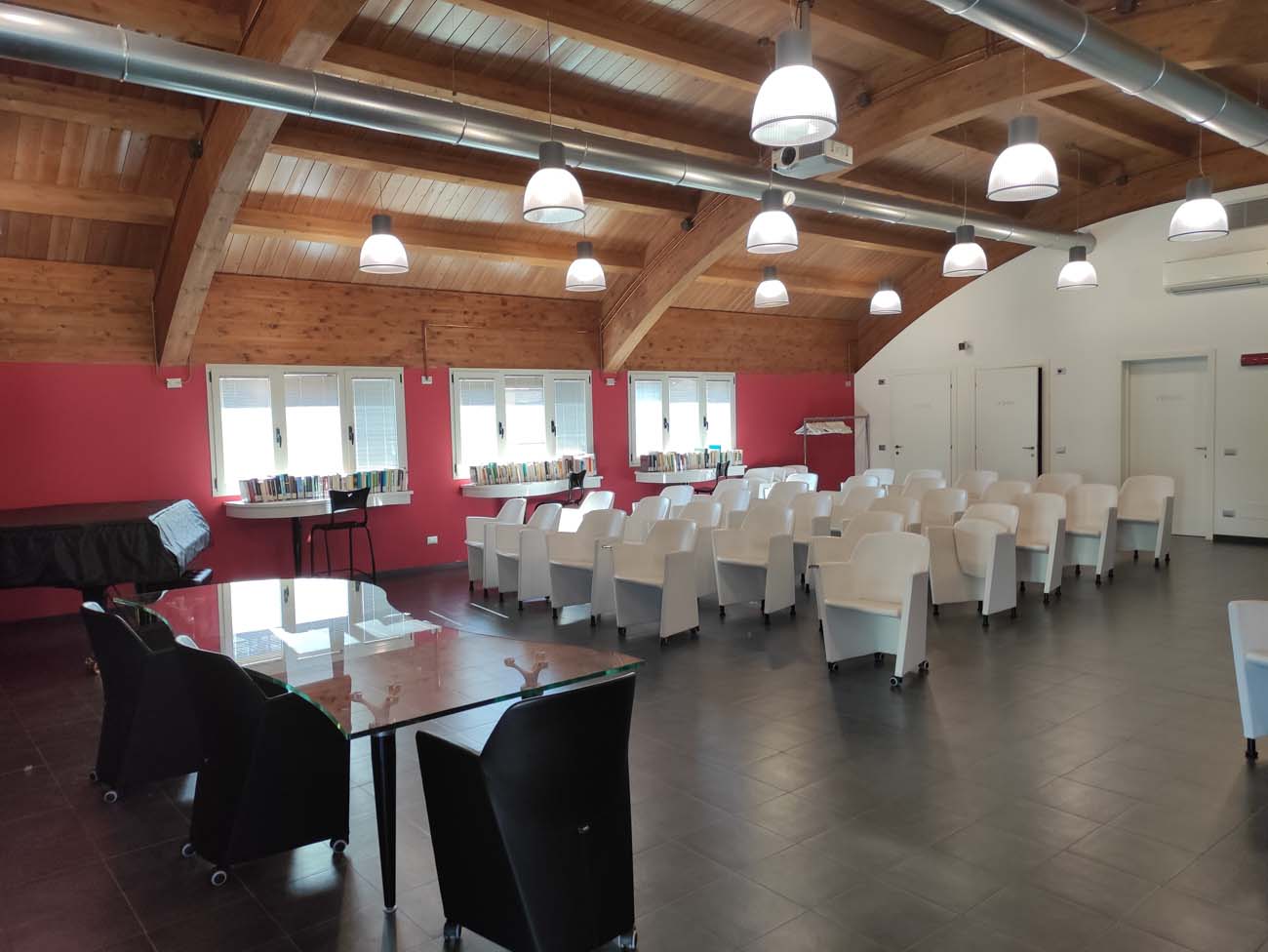 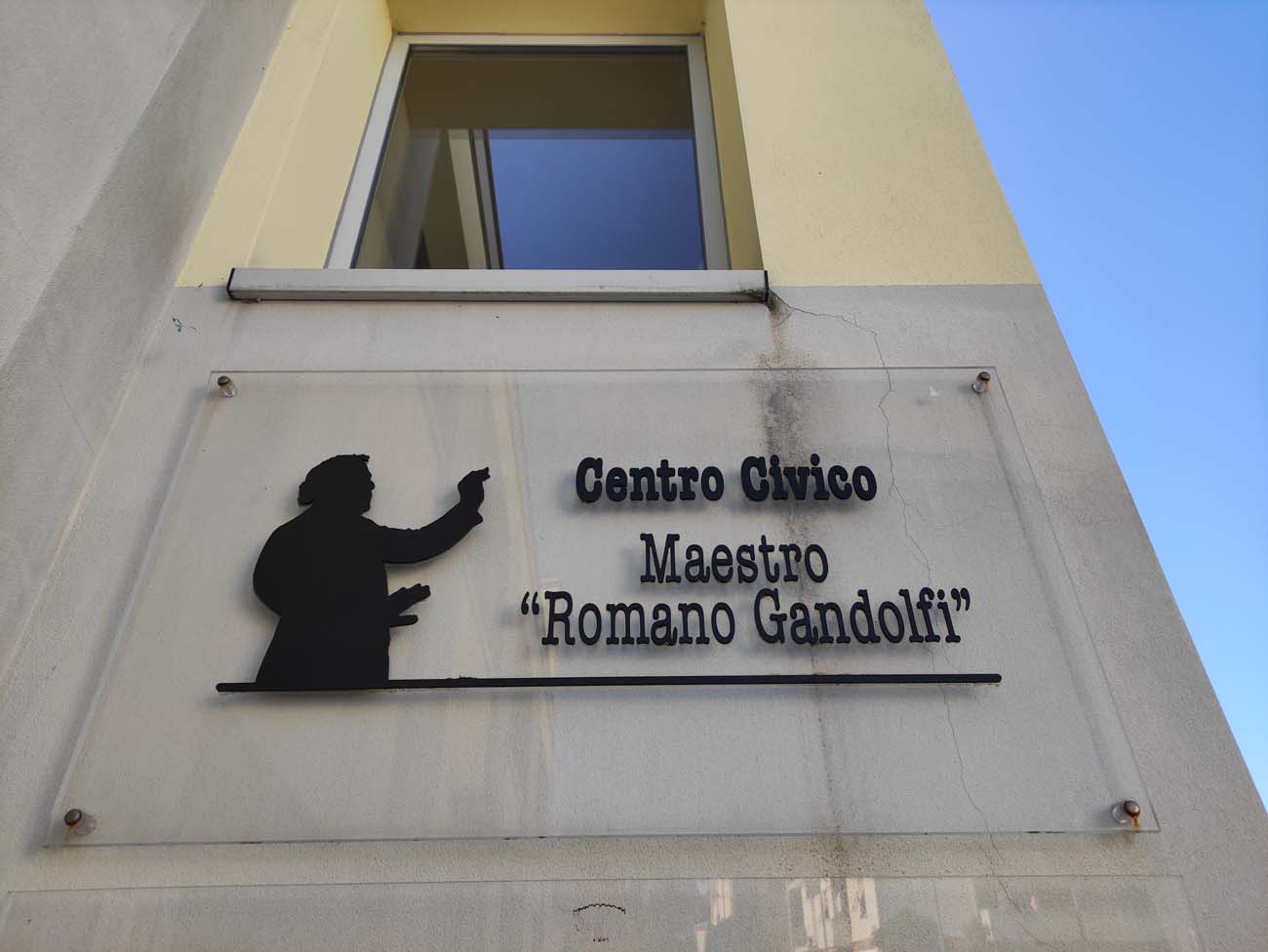 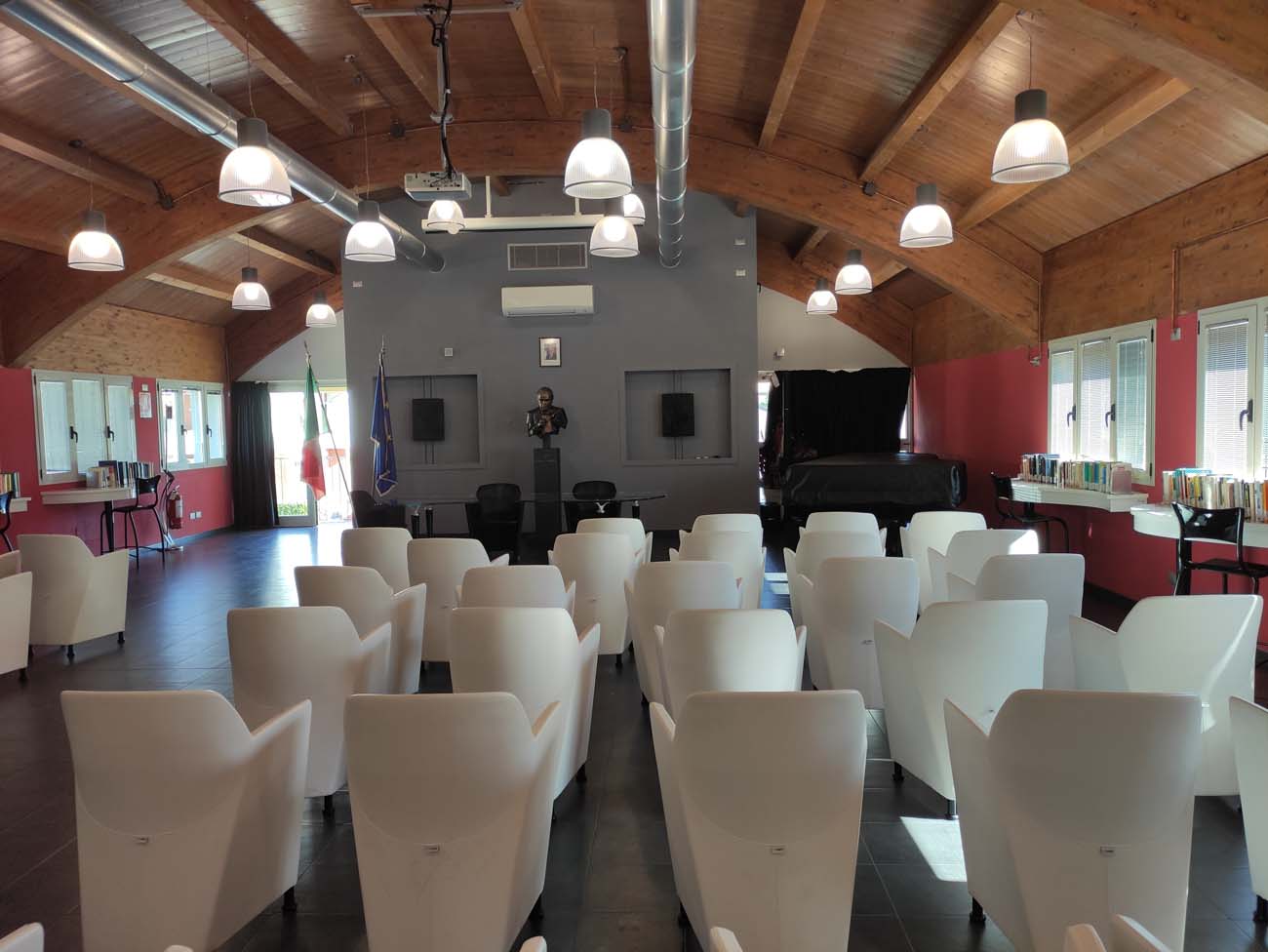 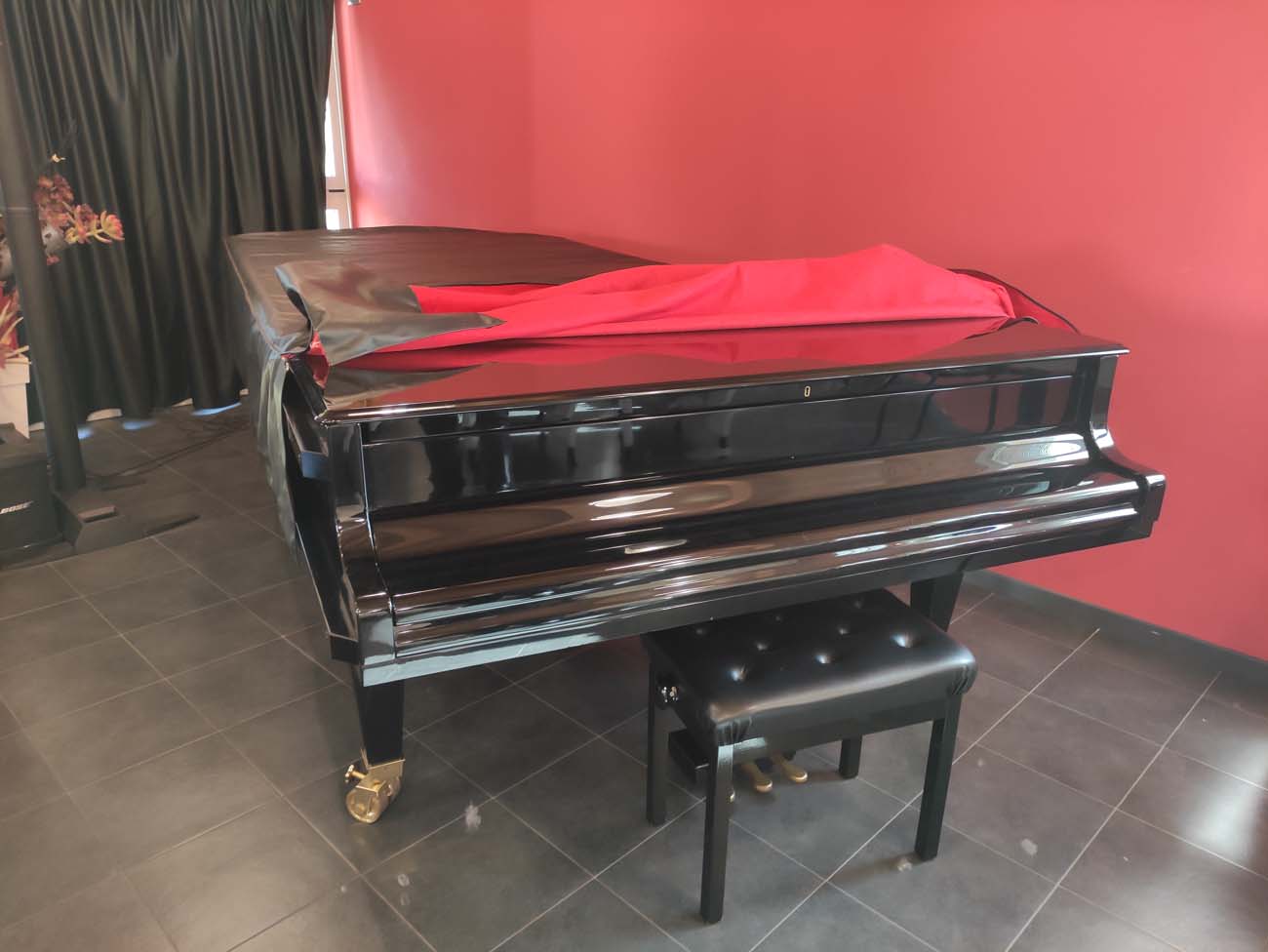 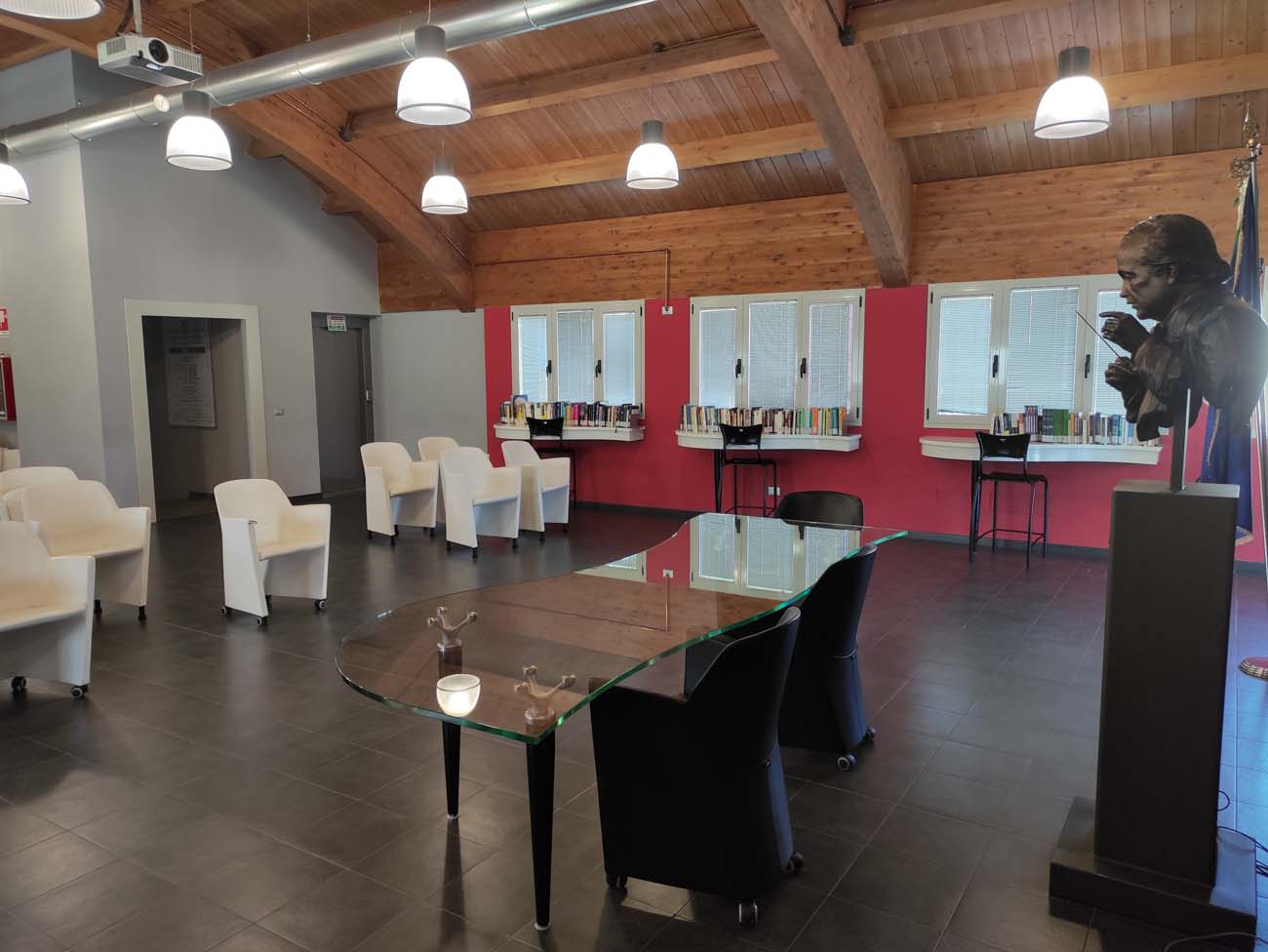 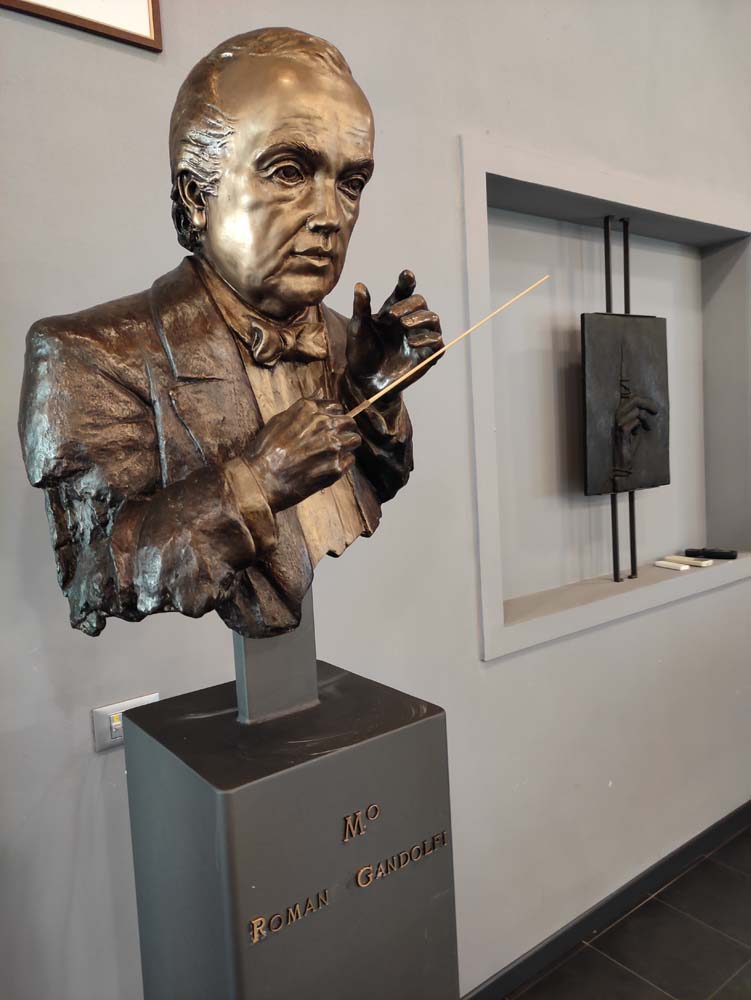 The transformation of a pre-existing place into a space for music is always a sort of miracle. The opening, after the adaptation works, of historic buildings, churches, industrial buildings (almost always saved by an inevitable abandonment destiny) often becomes an even more unexpected event than the inauguration of projects born from nothing. This is what happened to the Auditorium del Carmine, an austere and silent presence, for centuries placed next to the lively and resounding Conservatory, which now becomes a new meeting and cultural place for the city of Parma, almost reborn by the fresh vivifying energy of music. The fascinating space, defined by the gothic architecture frame, has been redesigned to allow the creation of a stage and an auditorium suitable for music performance, and the acoustic-opposed furnishings, with its technological profile, to the solemnity of the pointed arches – it has solved the many difficult problems of a variously segmented body with complicated and sometimes unpredictable sonic perspectives. The striking adjustable panels, constructed with the same pine wood as the case of the string instruments, can shape an imaginary harmonious container, which varies according to the type of music that will be performed. The first church and the first convent of the Carmine were built in 1273, thanks to the munificent donation of Lanfranco Bacchetti who left his possessions so that the Carmelite order, which was not present before, settled in Parma. Subsequently “The Senate of Parma, under the Provost of Giacomo Mandriano, obtained the license of the Senate of Milan around the year 1334, gave the aforementioned fathers the freedom to advance over the wall of the Parma Stream, with the object of being able to reduce the Convent and Church of greater perfection; and in more noble symmetry”. The bell tower was built in 1565, also with the competition of the Municipality of Parma. The main cloister of the convent was finally settled in 1583, like the sacristy erected in Doric order. The plan of the church is very irregular due to the later additions of lateral chapels, some Gothic, and others from the Renaissance, all more or less reworked in the Baroque period. The late-Gothic frescoes were torn, almost entirely, and placed in storage at the National Gallery. They generally testify to the Lombard influence – particularly of Foppa – and tended to exalt, even pictorially, the Gothic architecture of the vaults. They are all dated around 1480 or so. Fragments that witness a particular vitality, not only religious but also cultural. The Weigle organ of the Auditorium of the Parma Conservatory responds to a particularly interesting phonic criterion in its adaptability to any organ repertoire: the instrument, made by one of the great German organ builders, consists of 30 real registers arranged on 3 manuals and pedal on rigorously classical base according to the canons of the great Germanic tradition but tuned so as to be able to faithfully translate the various European organ repertoires. The location of the instrument, located in the church of the Carmine, now Auditorium, on a mezzanine above the entrance portal, faithfully follows, in turn, the original arrangement of the Nordic organs, in view of an optimal phonic performance. All this makes this organ a significant exclusivity in today’s panorama of the music production of Italian conservatories, so it can easily accommodate Recitals of the most varied genres. 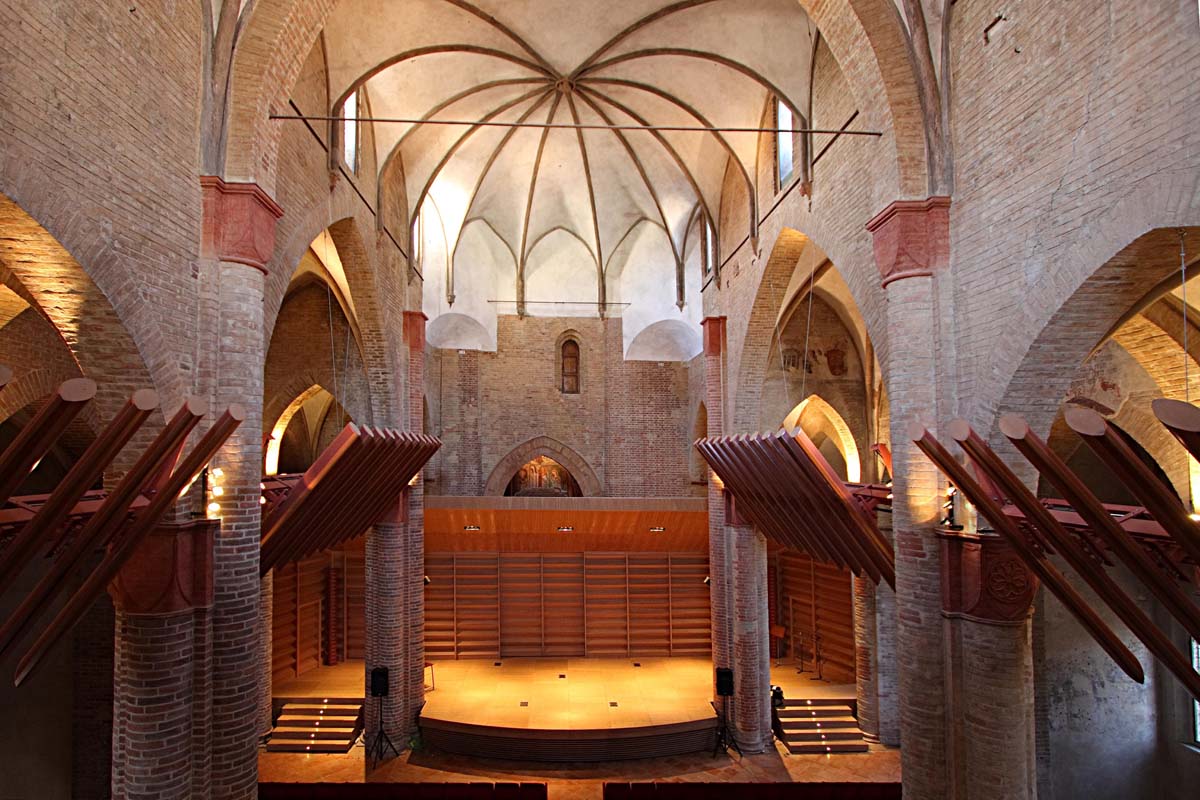 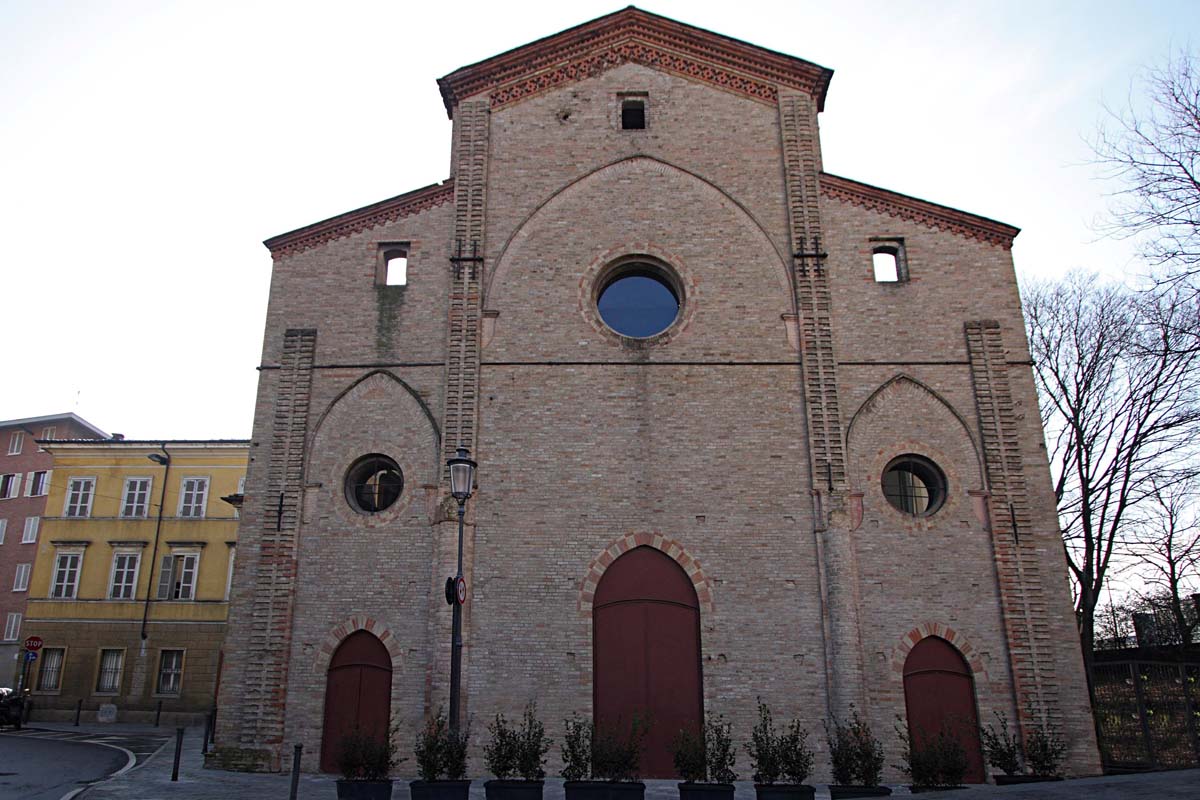 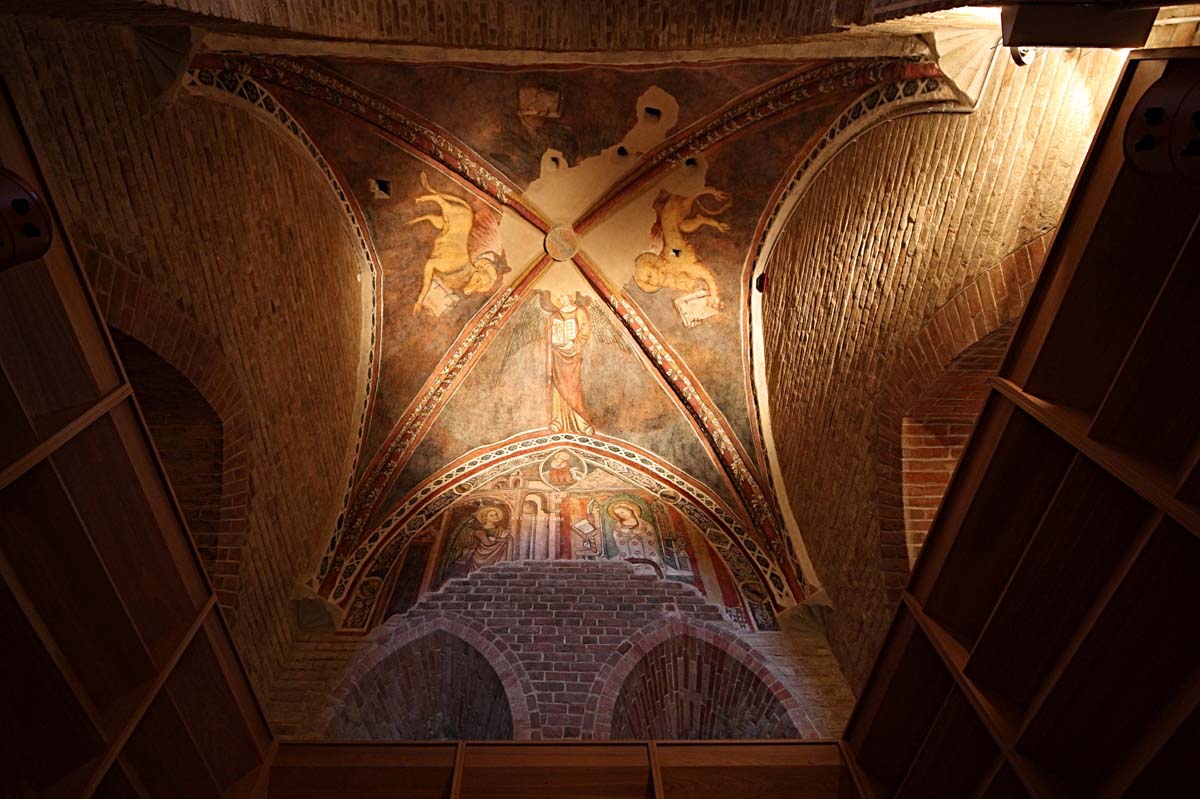 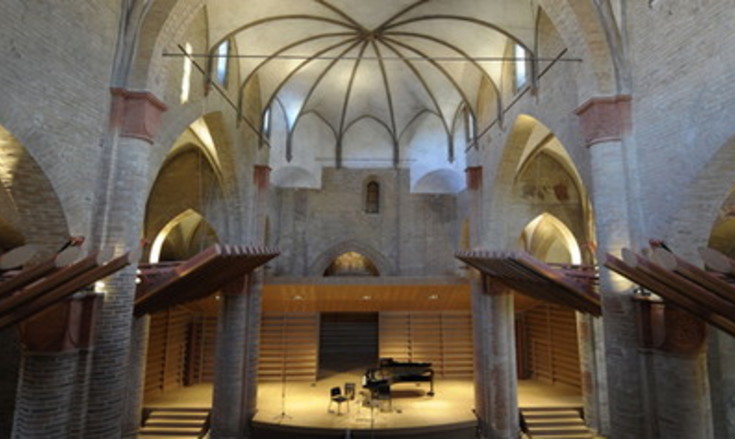 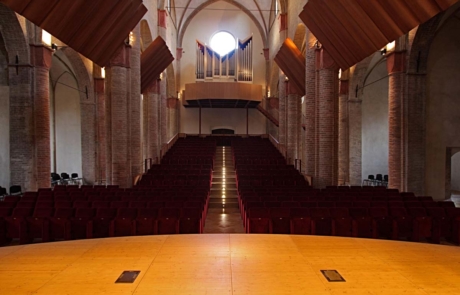 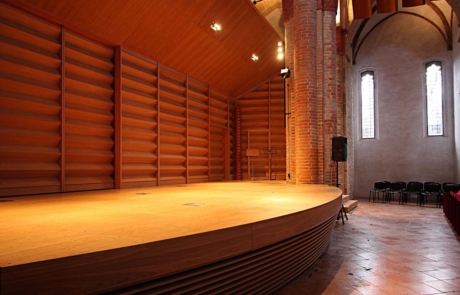 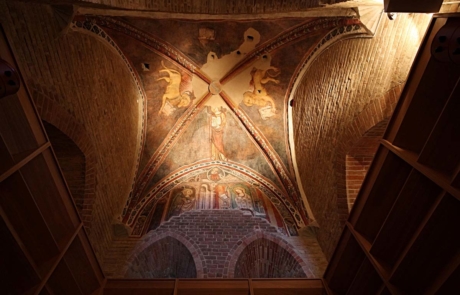 The construction of this building began in 1654 thanks to the act of donation by the Jesuit priest Giovanni Federico Cusani. On the façade, which is slightly spur-vaulted, three stone cornices delimit the ground and first floors, both marked by two rows of framed windows. On the ground floor they are interrupted by a high, unfinished, centina-shaped portal. A vestibule leads into a vast atrium with cross vaults supported by ashlar columns with a stone base, and from this into the large square inner courtyard. A solemn staircase with a balustrade leads to the first floor, where the numerous classrooms are served by corridors with busts and plaques that pass on the image and memory of the professors who brought prestige to this Parma Studium, one of the oldest in Europe. Numerous paintings adorn the Aula Magna with its ribbed vault and the Aula dei Filosofi, both of which still have their original stalls and chairs. The University of Parma arose in the 11th century from the evolution of the Parma Episcopal School, where the liberal arts of the trivium and quadrivium were taught. In 1601 Ranuccio I Farnese endowed the University with renewed constitutions and special privileges. Today, the University of Parma includes almost all the faculties, plus direct schools for special purposes and specialisations; it is the administrative seat of various research doctorates and participates in European programmes for student mobility. 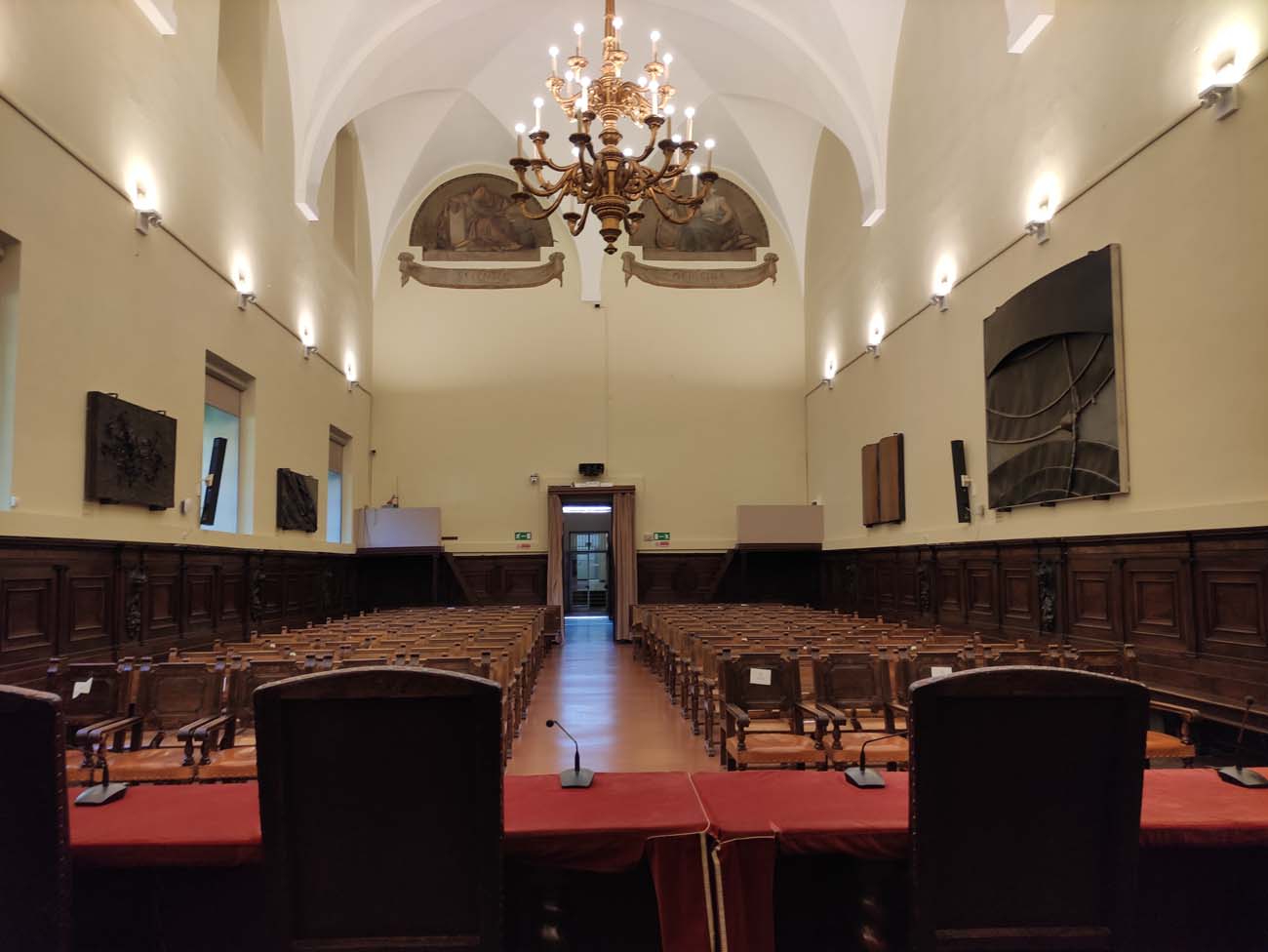 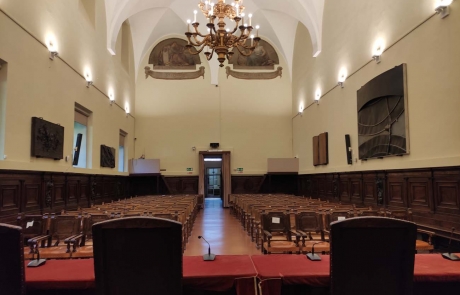 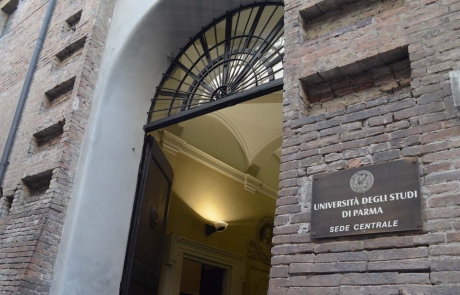 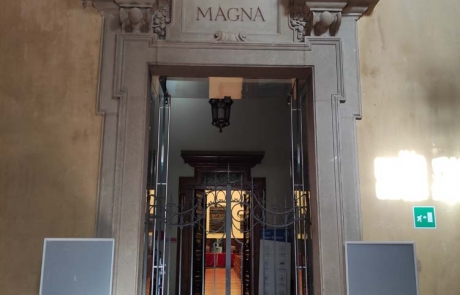 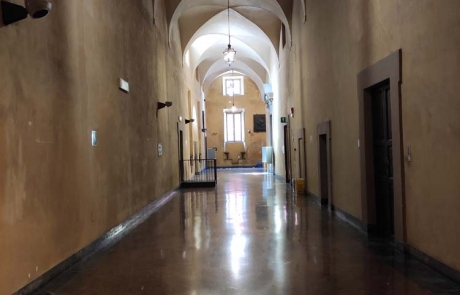 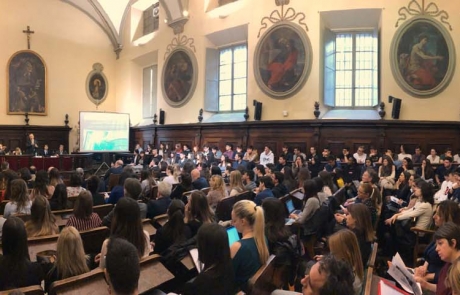 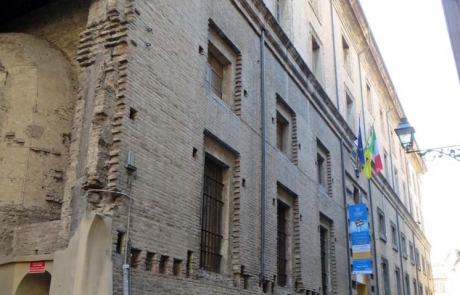